I love making platters for my God daughters. But now they are old enough to request really challenging stuff such as ‘ice cream cones in all different colours’. (!??!?!) I hunted through all of my moulds – that’s around 300 or so. In all of those moulds, I only found 1 single ice cream cone in a weathered lolly pop tray of clowns. I was going to have to make these 1 at a time. That means mixing up a single colour/flavour of chocolate just for a single cone. So I decided, being that it was the weekend before Easter, to make a matching set of Easter eggs to go with each flavour. That would (hopefully) solve any fights over the same flavours.

I started with the obvious ones. Vanilla flavour in white chocolate. Mint Choc Chip which I made by pressing some soft chocolate against the inside of the mould before adding the green mint flavoured white chocolate. This ensures that there’s some strong chocolate chips on the surface. Bubblegum flavour, a swirl of all the rainbow colours just like I got from the ice cream shop as a kid. Hot pink for musk. Banana in yellow. Cotton Candy in a purple swirl. Double Dark Choc Chip. Strawberry. Blueberry Swirl. And for Mum, Rum & Raisin! 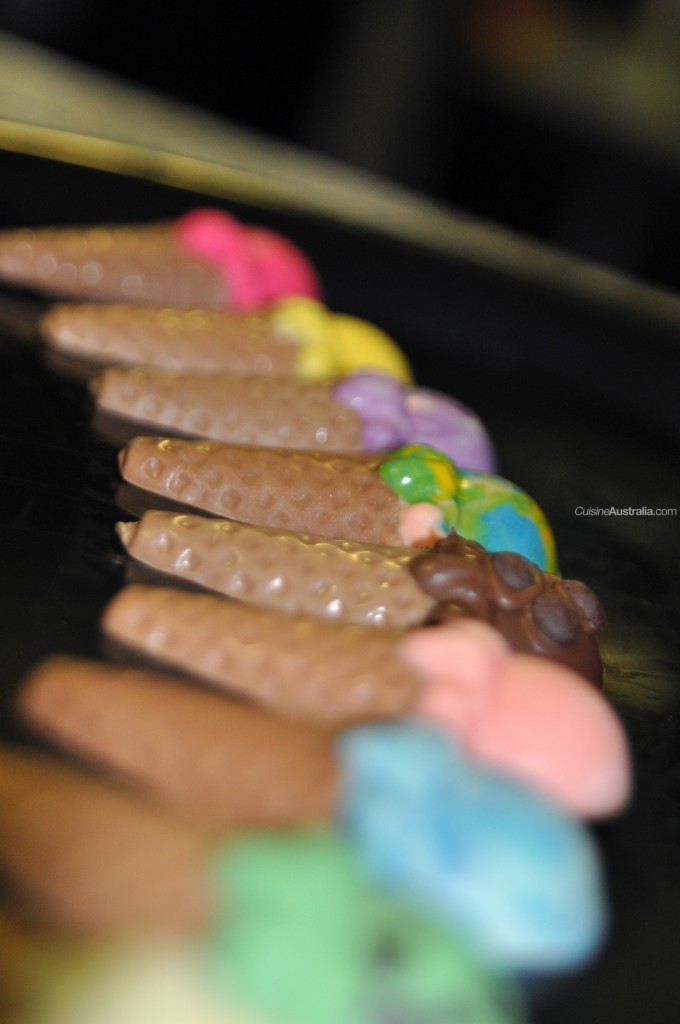 To create these I mixed the colour and flavour into the white chocolate individually, but made a single batch of light brown for the cones to ensure consistent colour throughout. This was stored and reheated a few times as I did this over a few nights.

Selecting the flavours was a combination of research on some ice cream websites to make sure I had the most popular and common flavours to add to the authenticity, and the flavours I had in my collection. Which is now over 40!!

I selected a few really popular and visually effective ice cream flavours because I knew these would create the impact needed to sell these as ice creams. Mint choc chip is unmistakable, and it looks a certain way as an ice cream with the chocolate breaking up a little into flecks, rather than solid chips. Bubblegum is also another ice cream flavour where everyone knows what it looks like – that swirly rainbow that is sometimes just blue and other times just kinda brown, but still with flecks of yellow and pink and green. The rest are a lot more simple and obvious but having these 2 effective examples ties the ice cream theme together and makes it convincing.

To ensure the quality of the presentation, I used a piping bag or a small teaspoon with a metal skewer to drag the colour into the ‘drips’ of ice cream which drip over the cone. Where the coloured chocolate didn’t stay within the lines of the ice cream in the mould, it didn’t look effective or professional. The precise line of ice cream against cone made all the difference, so work with smaller tools and keep wiping away excess chocolate to keep the cone surface clean. 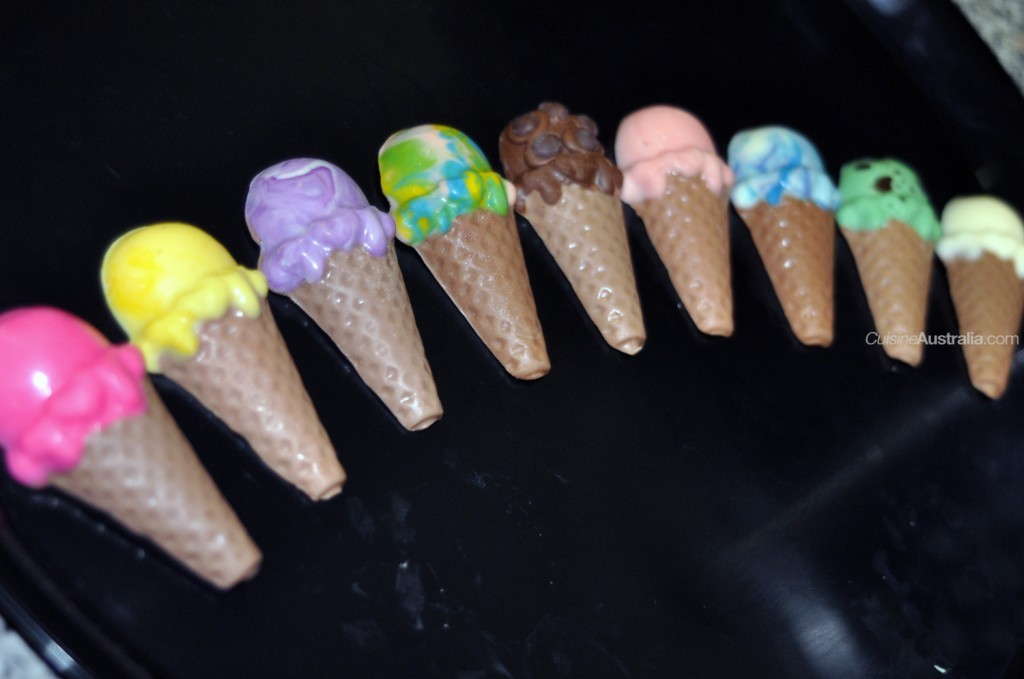 Don’t forget the basics. Polish your mould first. Use piping bags for small areas. Clean as you go.

PS – if you have any ideas on how to present this, please message us on Facebook! These could have been presented so much better, like standing up or something, but I couldn’t think of any better than a plain platter! What do you suggest?

- Instagram feed was successfully retrieved, but no photos found.